Reading Between the Lines of the Current Edition of Norton 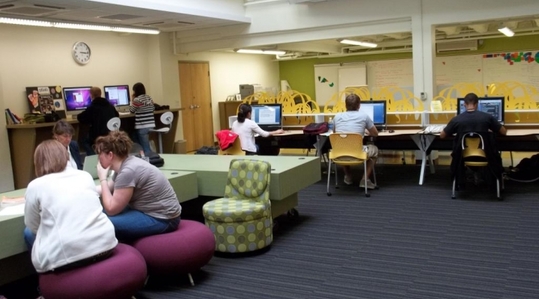 The "conversation of mankind" continues: Pictured above, students and consultants collaborating at The Noel Studio for Academic Creativity.
Writing center work may -- characteristically -- be invisible in the current edition but it can be said it is nonetheless implied in several works in the text, particularly those that offer an overview, history and/or rationale for how composition studies responded to open-admissions policies of the 1970s, the writing across the curriculum (WAC) and writing in the disciplines (WID) movements, the revival of rhetoric, and writing in the post-process era. But one of the strongest evocations is in "Collaborative Learning and the 'Conversation of Mankind'" in which Kenneth Bruffee makes the connection between reflective thinking and conversation to the writing process:

It is likely that such opportunities for "talking through" issues occur daily in the life of a professor. Not so, for the typical student. The solution, envisions Bruffee, are instigated instances of organized, task-related collaborative learning experiences. Notably, what he describes certainly resembles a writing center consultation during which students practice:

... the kinds of conversations valued by college teachers. ... The kind of conversation peer tutors engage in with their tutees, for example, can be emotionally involved, intellectually and substantively focused ... Collaborative learning provides the kinds of social context, the kind of community, in which normal discourse occurs: a community of knowledgeable peers. This is one of its main goals: to provide a context in which students can practice and master the normal discourse exercised in established knowledge communities in the academic world and in business, government, and the professions.... (551-553)

Increasingly, though, to function in academic "knowledge communities" requires rhetorical and compositional dexterities beyond those literacies most associated with the paper essay of the print-based era. That is the point Diana George makes in "From Analysis to Design: Visual Communication in the Teaching of Writing." Another article published in the current edition, that – reading between the lines – brings to mind writing centers as a viable space for -- what Bruffee might term -- "talking through" conversations on redefining what constitutes "text" in English Composition in a post-process, digital era.  However, George's piece is one of only a handful of articles in the current edition – one on blogging and another on technology and literacy -- that address something other that the paper-based composition.

More recent scholarship casts this transformational era as a kairos-wave of opportunity for uniting the often-contentious contingents in composition studies. Toward Making Composition Whole, written by scholar Jody Shipka and published in 2011, is perhaps one of the most reasonable, specific, and detailed arguments for theoretically situating multimodality in composition studies. All of which underlines the shifting shape of composition studies in the future, suggesting the need for a space and a place for such experimentation -- evoking the image of the writing center in the 21st century.

Examples, below, of student work presented on Shipka's website: remediatethis.com

For the discussion on the first articles we are proposing for inclusion click here.